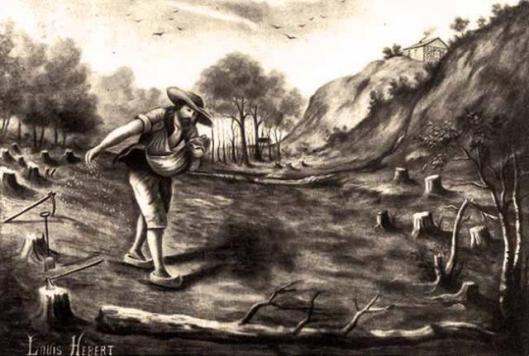 Before I write further on the subject of Nouvelle-France’s viability, we need to return to the blog I posted earlier this week: The Treaty of Paris (1763) and the Fate of the Canadiens. A few sentences disappeared as drafts were saved.

For instance, the section devoted to the Company of One Hundred Associates lost its last sentences.

However, it would not be unreasonable to think that the Associates played one role only, which was to send settlers to New France or bring settlers to New France and that, as a consequence, farming may have been limited. The individuals who were granted a SEIGNEURIE were not necessarily persons who could run a farming community.

The official reason given by the Company of One Hundred Associates for abandoning its mission in New France was hostility on the part of Amerindians. Settlers were being killed. The Associates played one role only: sending or bringing in settlers. The colony was attacked several times by hostile Amerindians, which means that the company did not ensure the safety of the settlers.

Moreover, in this part of the North-American continent, life was harsh. There were epidemics of scurvy. It was therefore necessary to bring in not only a regiment, but also medical practitioners. Had arrangements been made to that effect?

Canada’s first settlers who actually farmed the land were Louis Hébert (c. 1575 – January 1627) and his wife Marie Rollet.  Louis Hébert was an apothecary in Paris. His arrival dates back to the earliest days of New France and it was a blessing. He first went to Port-Royal, the main settlement in Acadie. He accompanied a relative, a cousin-in-law, the Baron de Poutrincourt, in what was an attempt to settle in the colony. However, Hébert did not settle definitively until Champlain built the HABITATION in what is now Quebec City. The first farmer had arrived but he, Louis Hébert, and his wife were unprotected.

In 1665, Louis XIV[i] of France did send the Régiment de Carignan-Salières, named after Thomas-François de Savoie, prince de Carignan. The regiment’s commander was the Marquis Henri de Chastelard de Salières, hence the name Carignan-Salières. At that rather late point, the colony was defended by 1 300 soldiers, 1,000 according to the Canadian Encyclopedia (French entry). The French settlers were attacked by Odinossonis called Iroquois or Agniers and also had to fight the citizens of Nieue Amsterdam, New Amsterdam (New York) where citizens were also attacked by Iroquois Amerindians. The Iroquois were defeated in 1666.

The entente signed in 1667, may have brought a temporary thruce in the struggle to survive despite attacks. However, at the end of the seventeenth century Madeleine de Verchères (3 mars 1678 – 8 août 1747), the 14 year-old daughter of a SEIGNEUR, drove away the Iroquois Amerindians, but historian Marcel Trudel[ii] has suggested that this story was embellished by Madeleine de Verchères herself. It nevertheless belongs to a chronicle of hostility on the part of the Iroquois against New France. But the Dutch and other colonists were also targeted by Iroquois. The Amerindians were losing their land.

Moreover, when I studied the fur trade (blogs are listed below, please click), I read that when he arrived in New France, Pierre-Esprit Radisson (1636–1710) was kidnapped by Amerindians and tortured.[iii]  And matters would not improve. When Pierre-Esprit and his brother-in-law, the older Médard Chouart des Groseillers (1618–1696), discovered the Hudson’s Bay, by land, colonial authorities did not, it seems, act in the best interest of the colony nor, for that matter, in the best interest of the motherland.

On the contrary, when Radisson and Groseillers brought back one hundred canoes of pelts to the shores of the St Lawrence, these were confiscated. Radisson therefore travelled to England, made a favorable impression, and in 1670, the Hudson’s Bay Company was created:

As a result, we now know why, “[i]n 1701, no furs were collected but France was forced to still pay the colony to keep it running.” (from a website entitled The Economy of New France, in PDF). It would appear that colonial authorities did not think in the long term. I suspect that they pounced on the pelts, made money quickly, thereby killing the Golden Goose. Authorities acted as if there were no tomorrow.

Morever, even though there were HABITANTS on SEIGNEURIES, little importance was given to agricultural skills. New France would grow into an agrarian society, but Louis Hébert introduced farming with very little help. He then fell on the treacherous ice, which killed him prematurely.

Related to this question is the matter of monopolies. I will tell a little more about the monopoly Henri IV of France gave Pierre du Gua de Mons.  This will take us back to an earlier post: Richelieu & Nouvelle-France.

However, I will pause  to avoid fatigue.  My next post is a continuation of this one. As mentioned above, I have made a list of  posts on the voyageurs, This list does not include posts on their songs.

In these fairy-like boats
The Voyageur Mythified
The Singing Voyageurs
The Voyageurs: from Sea to Sea
John Jacob Astor & the Voyageur as Settler and Explorer
The Voyageur and his Canoe
The Voyageurs and their Employers
The Voyageurs: hommes engagés ←
© Micheline Walker
4 May  2012
WordPress
________________________
[i] This date is consistent with the dissolution, in 1663, of the Company of One Hundred.
[ii] Marcel Trudel, Mythes et réalités dans l’histoire du Québec (Montréal: Bibliothèque Québécoise, Québec, 2006), 346 pages.
[iii] Grace Lee Nute, Caesars of the Wilderness: Médard Chouart, Sieur Des Groseilliers and Pierre-Esprit Radisson, 1618-1710. (not available)
0.000000 0.000000

4 thoughts on “New France: Once Upon a Time…”