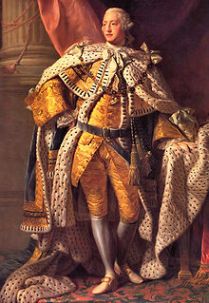 Under the terms of the Constitutional Act of 1791, the “colonial assemblies” of the two Canadas were granted “the right to levy taxes with which to pay for local civil and legal administration.” [ii] However, when Britain started helping itself to money levied through taxation in the Canadas, there was considerable indignation in both Canadas. Britain was in breach of the terms of the Constitutional Act. December 5, 1837 In Upper Canada, William Lyon Mackenzie (12 March 1795 – 28 August 1861), a journalist, a politician and the first mayor of Toronto, thought, at first, that such high-handedness could be stopped without an uprising and, possibly, bloodshed.  However, on 5 December 1837, after proclaiming a Declaration of Independence, he lead rebels into battle.  At one point, the rebels regrouped a Montgomery’s Tavern and a battle ensued.  The rebels lost and kept losing.

William Lyon Mackenzie was able to flee, but Samuel Launt and Peter Matthews were not so fortunate.  Both were hanged in Toronto on 12 April 1838. 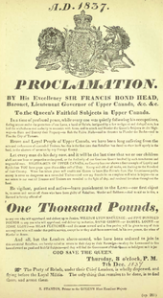 A proclamation posted on December 7, 1837 offering a reward of one thousand pounds for the capture of William Lyon Mackenzie

On 8 December 1837, a second group of rebels, led by Dr Charles Duncombe (Wikipedia) and “patriots” Robert Alway, Finlay Malcolm, Eliakim Malcolm, and Joshua Doan, rose outside Toronto. Duncombe gathered about 200 men and marched towards Toronto. A few hundred more rebels joined them on their march, but they dispersed near Hamilton on 13 December when they learned of Mackenzie’s defeat, and that a militia under Colonel Allan MacNab was on its way to stop them.

Duncombe and Eliakim Malcolm fled to the United States where Dr Duncombe remained for the rest of his life, despite being pardoned in 1843. Joshua Doan was executed in 1839.

There were other contentious issues, such as the Family Compact and the Clergy Reserve (Protestant Clergy) in Upper Canada. [iii]  But these will not be discussed in any depth in this post.  However, you may wish to read my post entitled Upper and Lower Canada, this current blog being its continuation.

Louis-Joseph Papineau, who had praised George III, could no more accept the Crown’s high-handedness than William Lyon Mackenzie.  In fact, no sooner did Papineau praise George III than he grew disillusioned with respect to British rule in general and the lack of power granted to the elected Legislative Assembly.  According to the Canadian Encyclopedia,

“[Papineau] came to see himself as the defender of the national heritage of French Canada and led the fight for control of the political institutions of Lower Canada. Early in his career he was a moderate who admired British parliamentary ins/titutions, but during the 1820s his views became more radical and his parliamentary strategy was obstructionist, using the Assembly’s control of revenues and the civil list to combat the policies of the English commercial class, which he considered anathema to the interests of French Canada.” [iv]

Too weak an elected Legislative Assembly

An elected Legislative Assembly was therefore outnumbered by appointed officials:
The power of the nonelective bodies of government was so overwhelming that in 1823, Papineau travelled to England to defeat, successfully, the Union Bill of 1822.  As for the the Assembly in Upper Canada, William Lyon MacKenzie was battling the Family Compact, Upper Canada’s version of Lower Canada’s Château Clique.  The Clique consisted of mostly rich and influential individuals appointed by the Lieutenant Governor as advisors.

November 1937: three main battles It follows that when the Crown began dipping into Lower Canada’s Assembly’s funds, protest soon escalated into rebellion. Having won a first battle at Saint-Denis, Papineau and the patriotes were defeated at Saint-Charles and Saint-Eustache.  Papineau fled to the United States. However, there was a second insurrection, led by Dr Robert Nelson, Wolfred Nelson‘s brother. The “patriotes” were defeated once again, and Papineau sailed to France.  The damage and repercussions are as follows:

Of the 99 condemned to death, only 12 went to the gallows, while 58 were transported to Australia. In total the 6 battles of both campaigns left 325 dead, 27 of them soldiers and the rest rebels, while 13 men were executed (one by the rebels), one was murdered, one committed suicide and 2 prisoners were shot. [vi]

Lord Durham, “Radical Jack,” was appointed to investigate the 1837-1838 rebellions in the Canadas, and to present a Report.  He reported that “French” Canadians “had no history and no culture” (Wikipedia) and recommended that they be assimilated and that the two Canadas be joined.  The Union Act is an “…Act of the British Parliament, passed July 1840 and proclaimed 10 February 1841, uniting UPPER CANADA and LOWER CANADA under one government.”  To his credit, Lord Durham dismissed the Family Compact as “a petty corrupt insolent Tory clique”. (“Family Compact,” Wikipedia)

Lord Durham’s Report and the Act of Union

The Act’s “main provisions were the establishment of a single parliament with equal representation from each constituent section; consolidation of debt; a permanent Civil List; banishment of the French language from official government use; and suspension of specific French Canadian institutions relating to education and civil law. The Act naturally aroused considerable opposition. In Upper Canada, the FAMILY COMPACT opposed union, and in Lower Canada religious and political leaders reacted against its anti-French measures. ” [vii]

Given the nature of his Report, one could surmise that Lord Durham considered the Rebellions of 1837-1838 a mainly ethnic struggle.  It would seem, in other words, that Lord Durham determined rather hastily the causes of the Rebellions. There can be no doubt that Lower Canada’s Canadiens liked their Lower Canada.  However, the Rebelllions of 1837-1838, which took place in both Canadas were, first and foremost, a step towards a greater measure of self-rule or responsible government. It does appear that the elected Assemblies of both Canadas had insufficient power.  Decisions were made by persons who were appointed, rather than elected, to their position, which was problematical.  As a result, when the British trespassed by dipping into the treasuries of both Canadas, there was dismay in both Canadas. Following the Act of Union, the French-speaking Canadians became a minority which was unavoidable.  Combined, the two Canadas were a predominantly English-speaking community, but the French were not assimilated.  However, enmity had been suggested and French-Canadian patriotes were executed by the British.  It had been 74 years since Britain ruled the inhabitants of the former and peaceful New France. The climate had therefore changed.  After the Act of Union (1840-1841), the Canadiens remained politically active, but Canadiens also huddled in various Petits-Canadas, French-speaking areas within English-speaking villages and other communities. The Seigneurial System was abolished in 1854 and, the birth rate being very high, the habitant‘s thirty acres continued to shrink as sons were born who could not remain into the land allotted them in the days of New France.  This caused an exode and the colonisation the Curé Labelle advocated.  See The Canadien’s Terroir and Maria Chapdelaine, earlier posts.  Yet, the daily life of Canadiens families did not change.  It was, in fact, as Krieghoff depicted it. 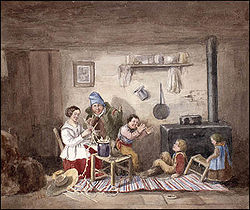