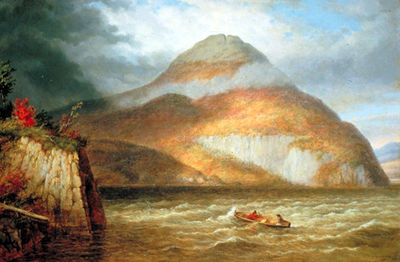 Owl’s Head and Skinner’s Cove on Lake Memphremagog, by Cornelius Krieghoff (courtesy The Canadian Encyclopedia and National Gallery of Art)

This is Owl’s Head as depicted by Cornelius Krieghoff, in 1856.

By and large, during the many years Dutch-Canadian artist Cornelius Krieghoff spent in Canada, he did not often visit the Eastern Townships, now called l’Estrie, the region southeast of Montreal where seigneurs did not own land.  But he made a painting of Owl’s Head and Skinner’s Cove, on Lake Memphremagog.  Owl’s Head is a small mountain.

In the early days of Nouvelle-France, the seigneuries were narrow and deep properties situated on the shores of the St Lawrence River.  I should think that forestiers (lumberjacks) and coureurs de bois, harvested wood and fur in the Eastern Townships and that there may have been a few Canadiens parishes.  However, the Townships were not settled systematically until 10,000 United Empire Loyalists fled the independent Thirteen Colonies out of loyalty to Britain.

Some went to St John’s, New Brunswick, some to Kingston, in the current Province of Ontario, but a large number settled in the area of the Province of Quebec that would be called the Eastern Townships (les Cantons de l’Est).  The Townships were a favorite destination for United Empire Loyalists.

The Eastern Townships are a mountainous area.  Its mountains are part of the Appalachian Mountains and therefore not very high or steep.  The Appalachians were probably cropped and rounded by icebergs and other northern giants moving south in a pre-historic past.  But although the Appalachian Mountains do not possess the high peaks of the Rocky Mountains, in Western Canada, they are nevertheless perfect for skiers in winter.  Moreover, the region has several lakes and rivers.  Closest to Sherbrooke, the main city in the Eastern Townships /l’Estrie, is Lake Memphremagog, where the Benedictine Abbey (Saint-Benoît-du-Lac) I wrote about in my Easter post is located. But Lake Memphremagog is also depicted in Krieghoff’s painting featured above (oil on canvas).

But let us travel back in time.  You may recall that the Quebec Act [i] of 1774, discussed in The Aftermath & Krieghoff’s Quintessential Quebec, made French-speaking Canadians full-fledged British citizens.  Many Canadiens were happy to have escaped the French Revolution, the priests in particular.  The same could be said of the seigneurs.  Their life remained as it had been before 1763, the year New France was officially ceded to Britain, under the terms of the Treaty of Paris.

Matters changed however with the arrival of United Empire Loyalists in the Province of Quebec and other British locations north of the Thirteen Colonies.  Authorities had to make room for the United Empire Loyalists.  Consequently, a large number of English-speaking settlers were given land in the Eastern Townships, now better known as l’Estrie.  So the Quebec Act needed reconsideration and reconsidered it was. 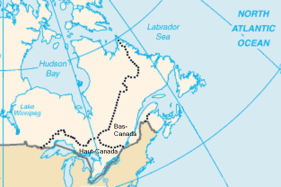 Lower Canada and Upper Canada, 1791 (please click on the map to enlarge it)

The year 1791 saw the enactment of the Constitutional Act, an act which Guy Carleton, 1st Baron Dorchester, KB (1724 – 1808) opposed.  The former Province of Quebec was divided into two Canadas: Lower Canada, down the St Lawrence River, and Upper Canada, up the St Lawrence River and bordering on the Great Lakes.

This division of the former Province of Quebec gave French-speaking Canadians a land, Lower Canada, in which they were the majority despite the arrival of United Empire Loyalists.  Therefore, their life did not change considerably.  In fact, the creation of Lower Canada gave French-speaking Canadians the sense that they inhabited a Canada of their own.  However, the Constitutional Act protected all Canadiens.  On this subject, I will quote the Canadian Encyclopedia in order to provide you with accurate information:

The Act guaranteed continuity of ownership of lands held under the SEIGNEURIAL SYSTEM in Lower Canada and created the CLERGY RESERVES in Upper Canada. [ii]

In the Canadian Encyclopedia, the Constitutional Act of 1791 is described as follows:

The bill had 4 main objectives: to guarantee the same rights and privileges as were enjoyed by loyal subjects elsewhere in North America; to ease the burden on the imperial treasury by granting colonial assemblies the right to levy taxes with which to pay for local civil and legal administration; to justify the territorial division of the PROVINCE OF QUEBEC and the creation of separate provincial legislatures; and to maintain and strengthen the bonds of political dependency by remedying acknowledged constitutional weaknesses of previous colonial governments. [iii]

In short, in 1791, the Quebec act was replaced by the Constitutional Act which led to the division of the Province of Quebec into two Canadas.  Everything seemed acceptable but, in 1837-1838, both Canadas rebelled.  Lord Durham, John George Lambton, 1st Earl of Durham GCB, PC (12 April 1792 – 28 July 1840), was asked to conduct an enquiry and provide a report as well as recommendations. The Report led to the Act of Union “enacted in July 1840 and proclaimed in 1841.” (Wikipedia, “The Act of Union”).

12 Alouette [iv] (please click on Alouette to hear the music)

[i] A short term for a long title: An Act for making more effectual Provision for the Government of the Province of Quebec in North America (please see below).
[ii] Pierre Toussignant, “The Constitutional Act 1791”
http://www.thecanadianencyclopedia.com/articles/constitutional-act-1791
[iii] Pierre Toussignant’ “The Constitutional Act”
http://www.thecanadianencyclopedia.com/articles/constitutional-act-1791
[iv] Theodore C. Blegen, Songs of the Voyageurs (St Paul: Minnesota Historical Society, 1998[1966], p. 46. (Université de Moncton’s 21-voice male choir)
The Fine Print:
The Quebec Act, 1774
According to Wikipedia, “the principal components of the [Quebec] Act
were:
The Constitutional Act of 1791, formally The Clergy Endowments (Canada) Act, 1791 (31 Geo. 3. c.31), is an Act of the Parliament of Great Britain.

480 thoughts on “Upper and Lower Canada”