Look at this beautiful room.  There are flowers on the windowsill.  A young girl is watering the flowers.  To the left, we find the essential day bed.  The carpeting seems hand-woven and is almost identical to French-Canadian “catalognes.”  The wooden floor is made of wide planks.  They were still available in those days.  The little stage is just right for children and makes a delightful side table for the person lying on the day bed.   The furniture is colored and the day bed, covered with striped fabric: blue stripes.

In my eyes, Carlsson’s paintings of his family and home are his masterpieces.  I love the details suggesting the daily life of a family.  For instance, I see the little white cat in the kitchen, the wool on a small dining-table, a young pianist at the piano. Carl and Karin Larsson loved their home and made it their jewell.  They made it Ett Hem (A home).

Carl Larsson (May 28, 1853 – January 22, 1919) was born in Stockholm to a very poor family.  But his artistic talents were recognized in time for him to be trained at the “principskola” of the Royal Swedish Academy of Arts where success as a student gave him confidence and led to employment.  For instance, he was, among other things, an illustrator.

Working as an illustrator left an imprint on Carl Larsson’s art.  Many artists do not let us see the sketch, or the lines, from which emerges the finished work of art.  But Larsson leaves in the lines which links him to the Arts and Crafts Movement.  The Arts and Crafts Movement, a mainly British movement, included such artists as Walter Crane, an illustrator.  Its membership also included the very prominent William Morris, its chief member.  The Arts and Crafts Movement is sometimes associated with Pre-Raphaelite artists such as Dante Gabriel Rossetti, Sir Edward Burne-Jones, John Ruskin, an artist and theorist, except that the Pre-Raphaelites went beyond realism.  They reached for a utopia.  As for Carl Larsson’s art, it is representational but very much alive.  In fact, it constitutes a compelling chronicle of a dream come true: a home!

Mammas och småflickornas rum (Mamma's and the small girls' room), 1897 (please click on the picture to enlarge it)

Definition
It is neither right nor wrong to show the sketches from which a painting emerges.  Carl Larrson’s does so in a discreet manner and to the advantage of his art.  It is characterized by definition, definition in its most fundamental acceptation.  This style may be a matter of temperament, but it could also be a matter of choice.

Larsson’s art also reflects exposure to the Barbizon School, a French movement particularly well represented by Jean-Baptiste-Camille Corot.  In fact, having spent two years with the ‘plein-air’ Barbizon disciples, Larsson founded a colony of Swedish artists working in France.  Among members of the group was Karin Bergöö, an artist and Carl Larsson’s future wife.  She and Carl had eight children.

When he met and married Karin, Larsson left behind abject poverty to enter a world that gave him not a castle but the home he had not had as a child and which would be home not only to his family, but also to those among us who, as I have already expressed, require an occasional refuge.  Lilla Hyttnäs is both alive and livable. 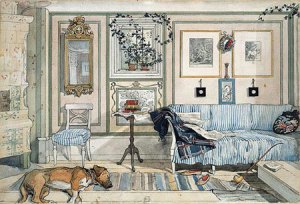 There is so much to say about Carl Larsson, but let the images speak for themselves.  I will confine this blog to Carl Larsson’s paintings of Lilla Hyttnäs, in Sundborn, a house given to Karin and Carl by Karin’s father and which expresses the very essence of home.

Let us listen to Carl Larsson tell us about his feelings when he first visited Lilla Hyttnäs:

While I was here, I experienced an indescribably delightful feeling of seclusion from the hustle and bustle of the world, which I have only experienced once before (and that was in a village in the French countryside).

Carl Larsson was influenced by other artists only to become one of the most influential artists of his time and ours.