For the English text of Charles Perrault‘s (12 January 1628 – 16 May 1703) fairy tales, beautifully illustrated by Gustave Doré, click on fairy tales.  For information on William Morris, click on Arts and Crafts or on William Morris. But if you click on this Cinderella, you will see that there are many retellings of Cinderella or Cendrillon.  The Brothers Grimm’s Cinderella does not feature a fairy godmother, but Cinderella prays on her mother’s tomb and is helped by all the animals, birds in particular.  They bring her the beautiful gowns she wears while dancing with the Prince.  However, she does lose a shoe because the prince has put pitch on the steps.  On the same website, you may also read that the story of Cinderella is almost as old as the world.

Cinderella is a fairy tale, so it belongs to a literary genre and genres share, to a lesser or greater extent, the same narrative structure.  With fairy tales, the “hero” goes from rags to riches and does so through the timely intervention of a fairy godmother, or a clever cat.  Therefore, the protagonist or hero, is at times rather passive, as is, for instance, Puss in Boots‘ disappointed master.  As I pointed out in an earlier post, were it not for his cat, the third son of the miller might not have become a prince.  It is the cat who takes him from rags to riches.

Traditionally, the protagonist of fairy tales, i.e. the third son or a Cinderella has a fairy godmother who appears at the opportune moment, i.e. kairos, to transform a Cinderella or some other character, into a beautiful person to whom the opportunity is given to be seen at his or her best.  This could suggest a lack of resourcefulness in the central character of a fairy tale, a point we will discuss after writing a summary of the plot.

The Plot: rejected girl needs a fairy godmother, but the shoe fits

This is how the rags-to-riches narrative of Cinderella unfolds.

A widower who has one daughter marries a widow who has two daughters.  In Charles Perrault’s version of the fairy tale, the widow’s two daughters are less attractive than Cinderella, so Cinderella is reduced to removing the ashes from chimneys and wears soiled clothes.

There is a ball to which the young women of the land are invited.  In fact, in some versions of Cinderella (the Brothers Grimm), there are three balls, or three days of festivities, the number three being the most important number in fairy tales.

When Cinderella arrives in the carriage her fairy godmother has magically fashioned out of a pumpkin, just as she has magically fashioned the horses, the coach, and the magnificent gown Cinderella wears, she is stunning, not to mention the beauty and uniqueness of the slippers she wears, translated as glass but perhaps otherwise crafted: “vair,” a  material, is pronounced the same way as “verre,” glass.  This matter is one scholars have studied without reaching a consensus.

During the last ball, Cinderella is so enjoying herself that she forgets that midnight is approaching and that, at midnight, she will return to her station as the girl who cleans the ashes out of chimneys.  She is running away so fast that she loses one of the slippers or shoes. 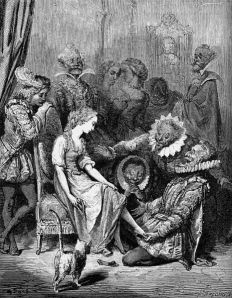 I will note later that Cinderella is rooted Rhodopis, 700 BCE, in which a slave girl marries the kind of Egypt, but tales often originate in India.  However, as we know, the five stories that make up the Pañcatantra, were written in Sanskrit, by Vishnu Sharma and then, in 750 CE, they were translated into Arabic, as Kalīlah wa Dimnah, by Persian scholar Abdullah Ibn al-Muqaffa’.  However there were other translations of the Pañcatantra, and other tales, before it was translated by Abdullah Ibn al-Muqaffa’. Furthermore, Vishnu Sharma may have taken his content, or subject matter, from an oral tradition. I will therefore be cautious as there may be a more ancient Cinderella, than Rhodopis.

But Perrault did not draw his material directly from an ancient source.  Cinderella was part of the tales of Giambattista Basile (c. 1575 –  23 February 1632), the author of the Neapolitan Lo cunto de li cunti overo lo trattenemiento de peccerille, later entitled Il Pentamerone.  Giovanni Francesco “Gianfrancesco” Straparola (c. 1480 – c. 1557) also wrote fairy tales, but he did not write a Cinderella. 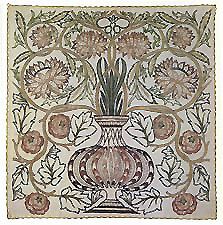 As stated above, the point that needs examination is the extent to which Cinderella participates in her transformation.  The short answer is that she needs help but is not as passive as she might seem.  She has gone to her father to ask for his help but her father, who loves his new wife, has refused to intervene on behalf of his daughter, which is not very fatherly.  However, had he intervened, he might have made matters more difficult for his daughter.  Cinderella’s stepmother has two daughters whose looks could jeopardize their ability to find a spouse and her daughters come first.

Other factors may be at play.  For instance, this is a fairy tale, not a comedy. Unlike the characters of comedies, Cinderella does not have a gentleman friend who can help her fight a heavy father, pater familias.  Nor does she have clever servants who would assist her and her gentleman friend. That happens in comedies, not in fairy tales. Perrault’s Cinderella truly needs a fairy godmother and she is fortunate that the prince happens to see beauty beneath deceptive appearances.  Despite their lovely gowns, the stepmother’s daughters have not been noticed by the prince who can see beauty in an unadorned Cinderella.

So I wonder whether Cinderella can do much for herself other than assist her fairy godmother by fetching a large pumpkin and helping her empty it of its contents so that it can be transformed into a princely carriage.  But, by an large, other than fetching the pumpkin and performing little task, Cinderella is very much in need of a fairy godmother, not to say a miracle.

However, destiny, the fates, have given Cinderella a fairy godmother.  But more importantly, destiny has given her beauty and grace.  Other than an opportunity to be seen by the prince, an opportunity which a fairy godmother orchestrates, it could be that Cinderella has all that is required of her.  Moreover, only she can wear the shoes, which is very much to her advantage. So the long answer may be that she cannot do much for herself, but that she has been so blessed by Lady Fortune that she really does not need to do much for herself.  In other words, although she needs and has a fairy godmother who arranges for her to meet the prince, her beauty and grace make her the perfect candidate for victory.  Besides, the prince notices her and the shoe fits.

So Cinderella does not rise from her own ashes, but she rises from ashes.