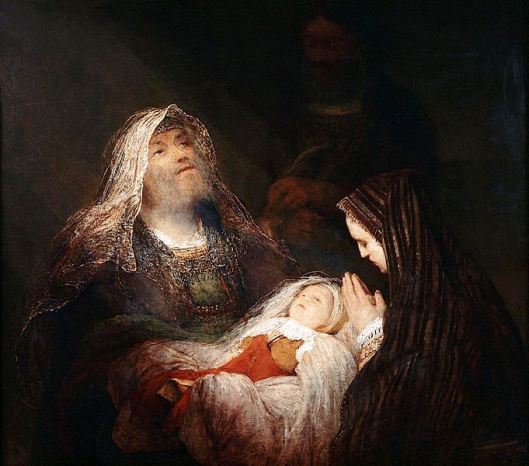 Aert de Gelder (or Arent, 26 October 1645 – 27 August 1727) is one of Rembrandt’s last pupils while in Amsterdam (1661 to 1663) (Wikipedia)I discovered I had to know Christian liturgy, first, when taking courses in the Fine Arts and, second, as a student of musicology. Students of musicology simply have to learn liturgy and the Nunc dimittis is a good example. There was a demand for liturgical music. As a result, the development of polyphony, the combination of voices, occurred from liturgical chant to liturgical chant and from madrigal to madrigal, its secular counterpart. Liturgy also constitutes one of the main subject matters of the visual arts.

In my family Candlemas was celebrated, but I was not told that the Nunc dimittis was Simeon’s Song of Praise, a canticle. In fact, although I attended a Catholic school, we were never told that Candlemas was a commemoration of the Presentation of Jesus at the Temple and of Mary’s Purification after Childbirth.

Here are the words of the “Nunc Dimittis:” 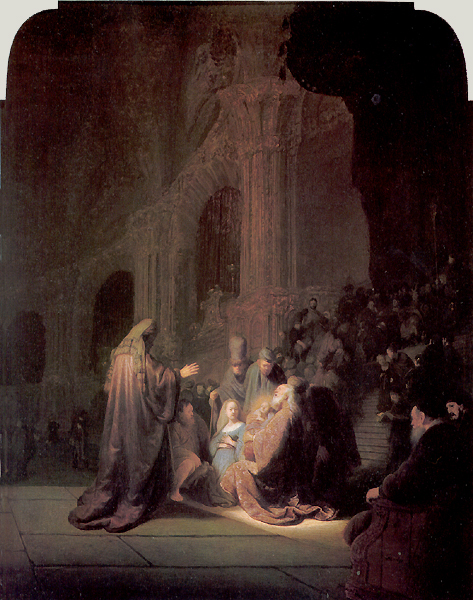 Presentation of Jesus at the Temple by Rembrandt van Rijn (Photo credit: Wikipedia) 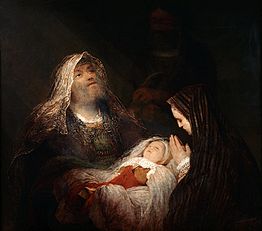 Linked to the presentation of Jesus at the Temple is the touching story of Simeon the Elder, or Simeon Senex. “According to the Biblical account, Simeon had been visited by the Holy Spirit and told that he would not die until he had seen the Lord’s Christ. On taking Jesus into his arms he uttered the prayer Nunc dimittis” (Wikipedia), also called the Canticle of Simeon, found in St. Luke’s Gospel (2:29-32). The Nunc dimittis is still used liturgically in many Christian churches.  Simeon also prophesied the crucifixion. He said to Mary:

Behold, this child is set for the falling and the rising of many in Israel, and for a sign which is spoken against. Yes, a sword will pierce through your own soul, that the thoughts of many hearts may be revealed (Luke 2:34-35).

In the Eastern Orthodox Church, the Presentation is called Hypapante (Meeting), “in reference to Jesus’ meeting in the Temple with the aged Simeon” (Wikipedia). Moreover, in the Eastern Church, the Presentation is a celebration of Christ and it is one of The Twelve Feasts, four of which honour Mary. But in the Western Church, Candlemas is the fourth of the Joyful Mysteries of the Rosary (from rose, the flower) that commemorate Mary.

The Festival of Lights

Christianity shaped its liturgical calendar according to what could be called a pagan calendar but is in fact nature’s calendar: the two solstices (Christmas and St John’s Day) and the two equinoctial points (Easter and Michaelmas: end of September). Candlemas is celebrated between the winter solstice, Christmas, and the spring equinox, Easter.

According to Brewers’ Dictionary of Phrase and Fable, “the ancient Romans had a custom of burning candles to scare away evil spirits.”[1]  Well, that practice was also long perpetuated, particularly in England, and might be revived.

We then come to the matter of Groundhog day. Foretelling what the remainder of winter would bring is not new, but the manner differs: