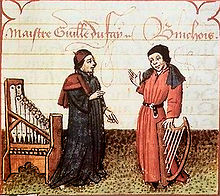 The examples I have used below are taken from Wikipedia and YouTube. (Please donate to Wikipedia. Small donations add up.)

Thomas Tallis "If ye love me"

Homophony in Tallis’s (c. 1505 – 23 November 1585) “If ye love me,” composed in 1549. The four voices move together using the same rhythm, and the relationship between them creates chords: the excerpt begins and ends with an F major triad. (Wikipedia)

Above is a bar, or measure, taken from J.S. Bach‘s “Fugue No.17 in A flat”, BWV 862, from Das Wohltemperierte Clavier (Part I), a famous example of contrapuntal polyphony. (Wikipedia)

The numbers indicate finguering.  They do not refer to the position of the chord: root position and inversions.  During the baroque period, it was not unusual simply to provide musicians with a figured bass from which they “realized” the chords.