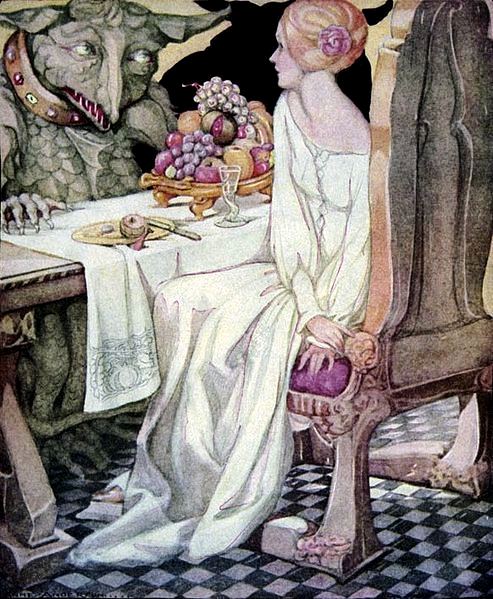 Many men are more truly beasts than you. A good heart and an ugly face are better than a fair face and a rotten heart.

Beauty and the Beast is my favourite fairy tale because beast is transformed into a prince by a beautiful woman who sees beauty beneath a beastly form. Being recognized as handsome and being loved by a woman despite his monstrous appearance is the only way Beast can escape the curse that has turned him into a truly ugly animal.

As the story goes, during a snowy night, Beauty’s father, an impoverished trader, gets lost in a forest where, to his astonishment, he finds a castle. It is a beautiful castle. On the table, there is a meal and logs are burning in a fireplace. Moreover, a bed awaits him in a lovely room and, upon waking, Beauty’s father finds clean clothes and a good breakfast. Obviously, the trader’s host is a generous person.

However, after meeting Beast, matters change. The former trader’s horse is saddled and awaits the lost father, but he picks up a rose for his daughter, as she has asked. Beast is furious and tells Beauty’s father to return three months later, when he will kill him. The father is also told that if he does not come back, one of his three daughters will die in his place. Yet, Beast gives him a trunk filled with gold, which is surprising.

This is a fairy tale, so the number three is used again. The trader lives on a little farm and has three daughters and three sons. Beauty is the youngest and the most beautiful of the three daughters. Unlike her jealous sisters, she is also kind and compassionate.

When three months have elapsed, the trader is ready to return to the castle and die, but Beauty manages to convince her father to let her go in his place.

Beast does not kill Beauty upon her arrival at the castle. In fact, she finds that he has given her an apartment: “Beauty’s apartment.” This is also surprising. The apartment contains many books and a grand piano. At night, she and Beast have supper together and, after a while, he starts asking her to marry him. But she keeps refusing.

One day, her mirror tells her that her father is ill. She asks Beast to let her visit with her ailing father. She promises to return. Beast, who was supposed to kill her, is devastated, but he lets her go and provides her with a ring that will allow her to find herself in the castle the morning after she puts it on. There is magic in this fairy tale, as is usually the case.

Beauty is away from the castle for more than a week, so when she returns, Beast is dying. She asks him to live and tells him she loves him and will marry him. She unknowingly lifts the curse that has transformed a prince into Beast. Beast is again a beautiful prince.

“Every evening the Beast paid her a visit” (Gutenberg)

7 thoughts on “Beauty and the Beast”