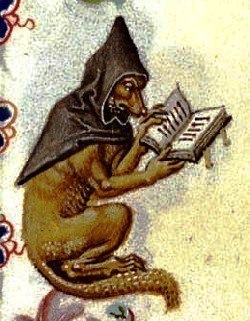 A studious fox in a monk’s cowl, in the margins of a Book of Hours, Utrecht, c. 1460
(Photo credit: Wikipedia)

The fox is beast literature’s foremost trickster and, as we will see below (Townsend), he is a stock character, much as commedia dell’arte characters: the jealous, the boastful, tricksters, etc. As a trickster, he is as cunning as Machiavelli would want his prince to be.

In Western European literature, we find him first in the

However, the trickster as archetype is as ancient as the Sanskrit Pañcatantra and Persian scholar Abdulla Ibn al-Muquaffa’s Arabic rendition of the Pañcatantra, Kalīlah wa Dimna. In Kalīlah wa Dimna, a sage, Dr Pidpai or Pilpay, gives advice to King Dabscheleim.  The Tales of Kalīlah and Dimna have been translated by Ramsay Wood. In these ancient texts, the trickster figure, or archetype, is a jackal.

What is most important with respect to beast epics and fables, beast literature’s main genres, is the concept of anthropomorphism. Anthropomorphic animals are humans in disguise and therefore inhabit a comic discourse where the formulaic “all’s well that ends well,” makes comedy’s traditional marriage possible.Whatever the obstacles, in comedy, the young couple marries.

Similarly, in beast literature talking animals are animals. So, given that real animals do not talk, this allows the author to write the truth with impunity.The lion may be a king, but the King, vanity forbids, is not a lion.

There also exist zoomorphic animals who, like the Centaur we met in Chapter XVIII of Machiavelli’s sixteenth-century’s The Prince are half beast and half human, which the prince should be, given the corrupt world in which he lives. Like the Centaur, angels are zoomorphic. Zoomorphic creatures may also combine features borrowed from several animals. They are not anthropomorphic, or humans in disguise. In fact, they are not talking animals.

Renart is a talking animal, and talking animals protect authors because animals do not talk despite considerable eloquence, particularly in the case of Reynard. Reynard’s barat, or clever talkativeness, can pull him out of the worst possible circumstances. As we will see, the fox can talk himself out of raping and, thereby escapes the gallows. A modern example of anthropomorphism in literature is George Orwell’s Animal Farm.

Also central to beast literature are the archetypes. The trickster is an archetype. In his Preface to Æsop’s Fables, George Fyler Townsend states that “[t]he introduction [in fables] of the animals or fictitious characters should be marked with an unexceptionable care and attention to their natural attributes, and to the qualities attributed to them by universal popular consent. The Fox should be always cunning, the Hare timid, the Lion bold, the Wolf cruel, the Bull strong, the Horse proud, and the Ass patient.” This statement reflects an anthropomorphic vision of animals and expresses literary conventions (archetypes: ‘by universal consent.’)

In my favourite version of this tale, not a Æsopic fable, the Fox overhears the Wolf tell the Lion, already a king, that the fox has been remiss in not visiting the sick lion. So the fox goes looking for old shoes and returns to the lion’s den. He tells the Lion-King that he has travelled the world in search of a cure to the king’s illness and that he has the worn shoes to prove he has not only travelled in search of a cure, but that he has also found it. To get better, the King must wrap himself inside the skin of a wolf whose characteristics are those of the future Isengrim, the wolf on whom Renart will play all kinds of tricks.

There is so much more to tell about Reynard, but now that we have the founding story, we can tell more. However, I should mention that Renart is a traveller. He is born in Ghent, migrates to France, goes to the Low Countries (Van den Vos Reinaerde) and then to Germany. He is Goethe’s Reinecke Fuchs (c. 1794) DE.

But I will close by emphasizing the popularity of the Roman de Renart. In French, a fox used to be called a goupil, so Renart was a goupil. However, le goupil became le renard (spelled with a ‘d’). Everyone knew Renart, the literary Renart.